Jason Edwards published a detailed review of Counter-History of the Present: Untimely Interrogations into Globalization, Technology, Democracy. It appeared in Contemporary Political Theory and can be read here. 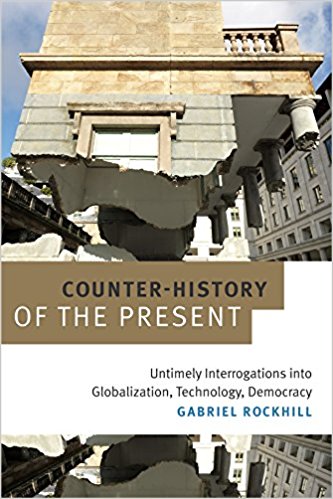 Excerpt: “Rockhill has written a provocative and highly readable book (indeed, it is even something of a page-turner). […] What is arresting about the book is the aplomb with which Rockhill goes about this task of disclosing the contingency of the present political imaginary. A review of this length cannot do justice to the political force of this critique. But that force, in general terms, lies in the relentless exposure of neoliberalism’s flattening out of ‘time, space, and society.’ If the force of political critique is not to be found in the revelation of a single reality marked out by being ‘now’ – which would be simply to recapitulate the homogenizing and destructive disposition of neoliberal practices of government – it may be located in the recognition of the multiple and contingently related realities of time, space, and social relations. A political theory that is sensitive to the way in which political imaginaries are constituted in and can be challenged through the practices connected across these realities, is likely to have a greater impact on those practices than one that busies itself with the fruitless search for a universal ideal of a democracy whose time can never come, precisely because its place lies outside of time, space, and society. […read more]”