My article, “Understanding France’s General Strike in the Context of the Yellow Vests and Global Class Warfare,” which was workshopped and published here by RED, just came out here in CounterPunch.

Excerpt: “The credibility crisis of the Macron regime is thus connected to a broader legitimacy crisis for the international system of pseudo-representative governments working for the capitalist class. As William I. Robinson has explained in books like Global Capitalism and the Crisis of Humanity, the transnational elite has sought to establish a neoliberal consensus in the era of globalization, which has required the mobilization of a social base that consensually supports it. Although the ruling class has succeeded in integrating the upper-echelons of society and organic intellectuals through ideological and material rewards, the system of global capitalist accumulation has simultaneously undermined the basis for wider hegemonic rule by stripping the popular classes of the material base necessary for their consent. In this regard, the widespread discontent with Macron’s “government of the rich” is indicative of a broader crisis of legitimacy for the global elite technocracy, which is tasked with maintaining or increasing capitalist accumulation while pacifying or subduing all of those who suffer from it.”

I’m honored by this Farsi translation of my latest article in the Los Angeles Review of Books’ “The Philosophical Salon,” entitled “The Failure of the French Intelligentsia? Intellectuals and Uprisings in the Case of the Yellow Vests.” A special thanks to my comrades in the Radical Education Department, as well as to Rahman Bouzari and Saleh Najafi!

My latest article in the LA Review of Books is available here.  It critically examines the relationship between the professional intelligentsia and the Yellow Vests: “Although France has the reputation of having a leftwing intelligentsia, some of the most visible theorists on the Left—including the self-proclaimed torchbearers of the ‘spirit of ’68’—have positioned themselves firmly against the movement or admonished it from the sidelines. This disconnect between important segments of the professional intelligentsia and one of the most powerful social movements of recent years raises very serious questions regarding the politics of intellectual life and, more generally, the relationship between the literati and uprisings. By exploring the intelligentsia’s response—both in France and beyond—to the Yellow Vests movement, this article seeks to elucidate the broader problematic of the role of intellectuals in the maintenance or transformation of the current socio-economic order […read more].”
A special thanks to all of my RED comrades for their excellent feedback and suggestions on this article, which we’ve also run here on RED’s website.

A special thanks to Rahman Bouzari and Shargh Newspaper for the Persian translation of my article “Is May 1968 About to Happen Again, or Be Surpassed? Mass Strikes, Occupations and the Fight for the Future Perfect in France.” Click here to read the Persian version.

My article, “Is May 1968 About to Happen Again, or Be Surpassed? Mass Strikes, Occupations and the Fight for the Future Perfect in France,” was published here in CounterPunch and here with photographs on RED. It was workshopped, as all of RED’s articles, in our collectively resourced, anti-capitalist research collaborative (not to be confused with academic peer-review or nepotistic editorialism).

Excerpt:
It is unclear what has become of Macron’s anti-utopian plans to recuperate the spirit of ’68 for the purposes of liberal modernization. Whatever becomes of them, they have already been powerfully pre-empted by a politics of rejuvenation and transformation that many hope will outstrip ’68 (slogans like ‘You are going to wish this was as small as ’68!’ or simply ‘Fuck ‘68’ are already circulating). Much remains to be seen and done, however, and the past political education of all of those involved will now confront the immediacy of a situation in which it is forced to be actualized. The past is only truly alive in the future, after all, meaning in the future perfect that it will have become. The best way to commemorate May 1968 would not only be to rejuvenate it, bringing it back from the dead as it were, but to surpass it. Tearing it out of the mausoleum of consecration by making it into a living transformation, May will only be what it will have become in its future perfect after 2018. 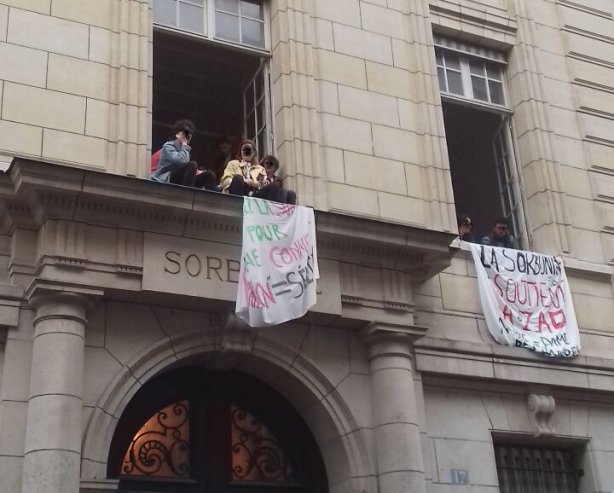 My article, “Academic Black Shirts Brutally Assault Students in France,” was published  here in CounterPunch and here on RED. A special thanks to John-Patrick Schultz for his insightful comments and suggestions.

Excerpt:
In scenes reminiscent of Mussolini’s black shirts, a dozen or so militants dressed in black, some wearing ski masks, brutally beat peaceful protesters who were participating in a general assembly while occupying the School of Law and Political Science in Montpellier, France. Armed with Tasers, cudgels with nails, and reinforced punching gloves, the assailants unleashed a bloody assault on the night of March 22, sending three students to the hospital and injuring many more. The security guards at the university stood idly by and watched the beatings, while the police and riot forces remained outside the university and did not enter to prevent the assailants’ attack.

END_OF_DOCUMENT_TOKEN_TO_BE_REPLACED 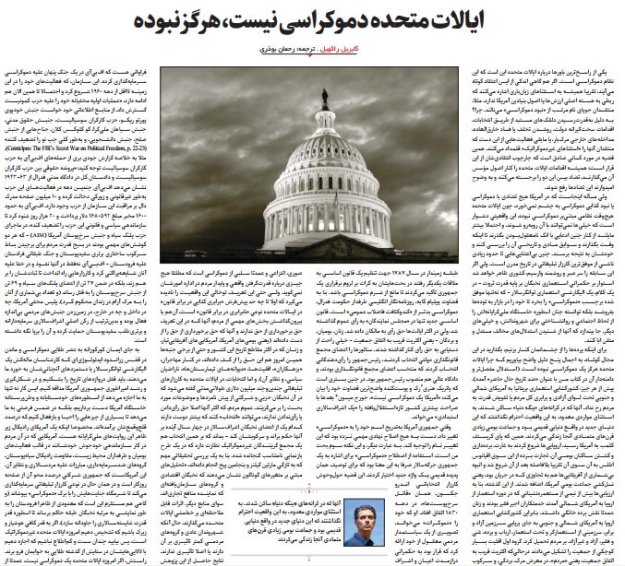 A special thanks to Rahman Bouzari and Shargh Newspaper for the Persian translation of my article “The U.S. is Not a Democracy, It Never Was.” Click here to read the Persian version.

My article, “The U.S. is Not a Democracy, It Never Was,” was just published in CounterPunch. It was developed as part of the research and activism activities of the Radical Education Department (RED). Click here to read it.

Excerpt:
Rather than blindly believing in a golden age of democracy in order to remain at all costs within the gilded cage of an ideology produced specifically for us by the well-paid spin-doctors of a plutocratic oligarchy, we should unlock the gates of history and meticulously

scrutinize the founding and evolution of the American imperial republic. This will not only allow us to take leave of its jingoist and self-congratulatory origin myths, but it will also provide us with the opportunity to resuscitate and reactivate so much of what they have sought to obliterate. In particular, there is a radical America just below the surface of these nationalist narratives, an America in which the population autonomously organizes itself in indigenous and ecological activism, black radical resistance, anti-capitalist mobilization, anti-patriarchal struggles, and so forth. It is this America that the corporate republic has sought to eradicate, while simultaneously investing in an expansive public relations campaign to cover over its crimes with the fig leaf of “democracy” (which has sometimes required integrating a few token individuals, who appear to be from below, into the elite ruling class in order to perpetuate the all-powerful myth of meritocracy). If we are astute and perspicacious enough to recognize that the U.S. is undemocratic today, let us not be so indolent or ill-informed that we let ourselves be lulled to sleep by lullabies praising its halcyon past. Indeed, if the United States is not a democracy today, it is in large part due to the fact that it never was one. Far from being a pessimistic conclusion, however, it is precisely by cracking open the hard shell of ideological encasement that we can tap into the radical forces that have been suppressed by it. These forces—not those that have been deployed to destroy them—should be the ultimate source of our pride in the power of the people […read more]. 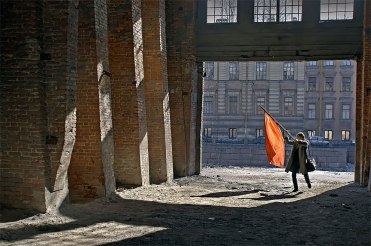 Click here to read my most recent post for the Radical Education Department (RED), entitled “Why RED, Why Now?” The post is on:
– the importance of hard leftism in the academy and beyond
– transversal organizing to avoid the pitfalls of horizontalism and verticalism
– autonomous and collective self-education qua community building
– breaking the ideological sound barrier of conservatives vs. liberals
– politics as the collective forging of collectivities rather than pandering & PR campaigns