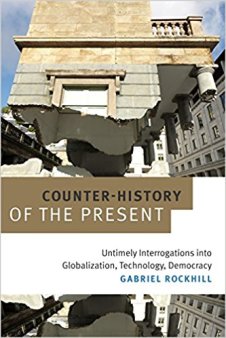 I will be presenting and discussing chapter two of Counter-History of the Present , entitled “Are We Really Living in a Technological Era?,” at Yale University on Friday April 6th, 2018 at 12 p.m. (Loria, 190 York Street, Room B-50). The event is organized by the Internet Culture Working Group and co-sponsored by the Marxism and culture Working Group. In addition to discussing this chapter and framing it in relation to the overall project of a counter-history of the present, I will outline my current research on the subterranean history of the national security state’s manipulation of the intellectual and cultural means of production.

array of current debates. These include a detailed dismantling of the sequential historical narrative leading from the structuralism of Foucault to Derrida’s post-structuralism; a radical critique of the political implications of the philosophy of difference; a meticulous reassessment of the force and limitations of the work of Jacques Rancière, Alain Badiou, and Cornelius Castoriadis; and a retrieval of architecture and public art, which have been largely excluded from certain contemporary theoretical debates on art and politics. Drawing on and developing his earlier work in Radical History & the Politics of Art, the book as a whole thereby proposes to modify the very framework for thinking the historical relation between aesthetics and politics.  END_OF_DOCUMENT_TOKEN_TO_BE_REPLACED